Grow your online business with M2E Pro solution. This release provides you with the full integration of your Magento store to Amazon Australia and Amazon Mexico.

The detailed instructions on how to upgrade M2E Pro Extension can be found in this article.

Magento official extension store is built to provide all Magento merchants with the better selling experience. Only those modules which have been carefully selected via Extension Quality Program are released on the Marketplace.

There is great news for all Users of Magento M2E Pro integration solution. Starting from v1.3.2, M2E Pro is available on Magento Marketplace. The Extension has successfully passed a rigorous selection process including the business, technical, and marketing review.

M2E Pro is fully compatible with Magento v2.0 and higher to provide numerous merchants who are selling via Magento platform with the high-level service.

Using Magento Marketplace tools, the Extension installation/upgrade executed automatically and does not require any technical knowledge for that. The detailed instructions on how to install/upgrade your M2E Pro Instance can be found here.

All future Module releases will be listed on Magento Marketplace so that you can easily get the most up-to-date M2E Pro functionality.

Amazon has confirmed its intention to launch the retail selling on Australian marketplace in addition to the previously released Amazon Web Services and Kindle Store.

This means that businesses from all over the world can increase their sales, reach Australian customers and provide them with the local ordering advantages. While Australian sellers have got another one channel to reach their buyers.

Amazon is going to place several local warehouses across Australia, which will expedite the Item delivery to the final consumers.

M2E Pro Team works towards your business increase and profitability. That is why it has already provided the full support of Amazon Australia integration on the Extension side.

Once you upgrade your M2E Pro Instance to 1.3.2 version, you can Enable an Australian marketplace (Amazon Integration > Marketplaces). 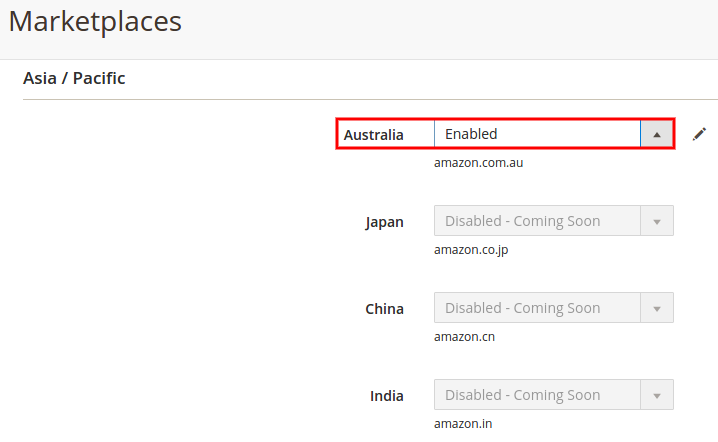 Next, add an Account, create a Listing, configure the Policies and List the Products to enjoy your sales on the new Amazon marketplace.

Please note, as of October 2017, some of your Offers listed on Australian marketplace via M2E Pro may not be available on Amazon frontend yet. It is due to the temporal Amazon restrictions.

M2E Pro provides you with another possibility to increase your business sales. Starting from this release, Amazon Mexico has also become available for all Module Users.

Enable the marketplace (Amazon Integration > Marketplaces) to add an Account, create a Listing, configure the Policies and List your Products on Amazon Mexico.

There is nothing easier than growing your business with M2E Pro.

Note, as of October 2017, the New ASIN/ISBN Creation feature is unavailable on Amazon Mexico. M2E Pro Team is currently working on this functionality to release it in the future Module version.